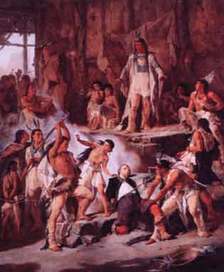 As we know, there has been much debate over whether John Smith was actually rescued by Pocahontas or not. That debate is not resolved, but the question has been complicated by the introduction of the "adoption ceremony" theory.

What is a Native American adoption ceremony?
In some Native American tribal societies, orphaned children and captive adults won in battle were sometimes adopted by their captors and underwent a ritualized death and re-birth as newly accepted tribal members. It is often said that this is what happened to John Smith, possibly with Pocahontas as a participant.

Scholars today generally agree that the Powhatan Indians, around the time of the 'rescue', sought to have John Smith, and by extension, the English settlers at Jamestown, as allies against the Spanish and against enemy tribes. As such, there was likely a moment when Powhatan conferred upon Smith a special status vis a vis the Powhatan confederacy. However, there continues to be debate as to whether the rescue that Smith described, if it occurred at all, and an 'adoption' refer to the same thing. Some scholars who doubt there ever was a rescue separate the 'adoption' from the rescue incident. Some who dispute the 'rescue' nevertheless say Smith was actually describing an 'adoption", which in my view provides a muddled and unsatisfactory understanding. How can something that didn't happen at all (in their view) be used to describe something else?

It was an adoption ceremony

Camilla Townsend, Pocahontas and the Powhatan Dilemma (2004)
My comment:
In her footnote #24, Townsend cites Kathleen Brown, Karen Ordahl Kupperman, Daniel Richter, Frederic Gleach, and Margaret Holmes Williamson as those who provide the "broad consensus", with Rountree having doubts. Count Townsend in the camp of "there was no actual rescue; it was merely an adoption ceremony."
Rebecca K. Jager, Malinche, Pocahontas, and Sacagawea: Indian Women as Cultural Intermediaries and National Symbols (2015)

My comment:
Jager cites Gunn Allen and Hulme for the adoption theory, but we can assume that Jager is pretty much on board with this thinking. As we can see in her wording, she prefers to think of it as there being an actual rescue that resulted in Smith being adopted by the Powhatans, the details of which Smith failed to understand.
Frederic W. Gleach, Powhatan's World and Colonial Virginia: A Conflict of Cultures (1997)

My comment:
Gleach believes Smith's account that Pocahontas was part of a 'symbolic' rescue that was actually an adoption ritual. He further theorizes that the Powhatans were not only adopting Smith, but adopting the English, with Smith as their representative.
Karen Ordahl Kupperman, The Jamestown Project (2007)
My comment:
Kupperman quotes Smith from The Generall Historie so that the legendary story remains intact, then clarifies that scholars believe it was actually an adoption ceremony. Her wording "modern scholars argue" doesn't indicate where she herself stands on the question. She just wants to dispense with the issue and move on to topics she can actually contribute to. I noticed that Townsend, above, cites Kupperman as part of the "broad consensus" that supports the adoption theory. Townsend's book was written 3 years before The Jamestown Project, so her knowledge of Kupperman's view had to come from something earlier, and presumably a book or article that was more definitive about Kupperman's beliefs than the quote above.

It was not an adoption ceremony

David A. Price, Love & Hate in Jamestown; John Smith, Pocahontas, and the Start of a New Nation (2003)
My comments:
Price cites no one in his assertion that no other tribe in North America is known to have had an adoption procedure like the one Smith described. However, it's often difficult to find sources for the non-existence of something, so I suppose we have to give Price the benefit of the doubt that he diligently researched this and found nothing. Frederic Gleach, a specialist in this area, and quoted above, appears to be satisfied that such adoption ceremonies existed.

On the question of why he remained clueless of the true nature of his near execution, there are two points to be made. A couple days after the "rescue" he was told that he now had a special relationship to Powhatan and they would henceforth share resources (or so Smith said). Thus Smith did not remain "clueless" about his adoption; he merely separated the rescue and his new, special relationship to the Powhatans in his mind. Secondly, his account of the rescue came many years later, so it's possible his thoughts on what happened to him had evolved. He also (probably) learned of the Juan Ortiz story after he returned to England to help shape his thinking. [I have no evidence that Smith knew of the Ortiz story, but that's the type of thing he'd have been keen to read about.]

Price's belief that Pocahontas actually rescued Smith as an act of compassion puts him in a minority at this point in the 21st Century. However, knowing how the Pocahontas legend has morphed over time, we should not be surprised if this line of thinking comes into fashion again someday.
Helen C. Rountree (2005); Pocahontas, Powhatan, Opechancanough: Three Indian Lives Changed by Jamestown
My comment:
Rountree references Philip Barbour, a mid-20th Century scholar on John Smith.and the Jamestown settlement. (Link to his papers). Her resistance to the adoption ceremony appears to be that the details described by Smith don't match her understanding of such an event, plus her general belief that Smith made up the entire incident (see Rescue page).

Helen C. Rountree (1990); Pocahontas's People: The Powhatan Indians of Virginia Through Four Centuries
Comment:
Frederic W. Gleach, quoted above, disputes Rountree's conclusion on the adoption theory and calls her out (Powhatan's World and Colonial Virginia: A Conflict of Cultures, 1997):
Summary

To summarize this a bit, we see that experts disagree on whether or not the 'rescue' was actually an adoption ceremony. To believe that it was, you first have to believe that Smith was telling the truth as he understood it, even if his cultural understanding was inadequate to the task. There is also the possibility that the adoption, if there was one, is not identical to the Pocahontas 'rescue.' Smith may have been adopted near the end of his captivity without he himself understanding it, and regardless of whether or not the Pocahontas 'rescue' happened as he described it. My personal feeling, for what it's worth, is that Smith was adopted near the end of his captivity as an attempt by the Powhatan to secure the English as allies, though I have serious doubts (with room for future revision) about whether the 'rescue' actually occurred. - 7/20/2019
Relevant Documents