Was there a Powhatan prophecy that predicted the arrival of enemies from the east? 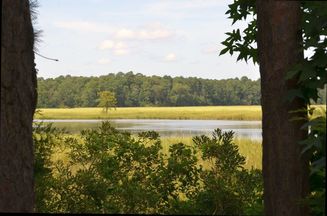 Outside Historic Jamestowne, 2016
There were actually two prophecies, as I'll explain below. But first, here are my musings on prophecies ...

Prophecies are only fascinating when they are accurate. Prophecies that don't hit are quickly forgotten, which is nice for prognosticators. There are ways to boost the success rate of a prophecy. One way is to be vague enough so the prophecy can apply to several different outcomes. It's also good to deliver the prophecy orally, so later the details of what was said are debatable. To ensure a perfectly accurate prophecy, you can even make it after the event has occurred. Such an extreme measure is rarely required, though, as the public is typically as eager to see a prophecy hit as the prognosticator (assuming they are not its victims) and will make allowances. This is especially true of historical prophecies, and people will validate the accuracy of an ancient prophecy even if it didn't exactly hit on the nail.. Bonus points are awarded for prophecies that were ignored or misinterpreted in their time.

Does any of that apply to the Powhatan case? Maybe, maybe not..

Many of the books on the Jamestown story tell of a Powhatan prophecy that foretold the cataclysmic events that would befall the native population in the 1600s. Here's the prophecy according to David Price (2003), from Love & Hate in Jamestown.
The idea of a prophecy foretelling the arrival of the English is interesting, but we have to ask ourselves if there really was such a prophecy in advance of the English, and also how well does the prophecy match up with events in the early 1600s? While thinking about these questions, I stumbled on a similar prophecy attributed to the Aztecs about the arrival of invaders from the East, which pointed to the coming of the Spanish. Camilla Townsend, who wrote about both the Aztecs and Pocahontas, is skeptical of the prophecy in the case of the Aztecs, and it's worth checking to see if her reasoning also applies to the Powhatan situation. At the risk of mixing information about these two very different cultures, I will quote Townsend's 2015 writings about the Aztecs.

Camilla Townsend, Pocahontas and the Powhatan Dilemma (2004):
Before I attempt to answer the questions I've posed above, a clarification needs to be made about the "Powhatan prophecy." Authors who write about the Jamestown story don't typically emphasize this point, but William Strachey, our source for this topic, actually wrote about two separate Powhatan prophecies. Historians apparently find that needlessly complicated and tend to write about one or the other in order to make their point. There's nothing terribly sinister about that, but in order to assess the accuracy of the prophecies, we have to look at Strachey's actual words and in doing so we find that the two prophecies specify different conditions. Strachey's actual account is as follows:
William Strachey (1612) The Historie of Travaile Into Virginia Britinia, p. 101 [source]
To recap the differences, the first prophecy specifies a nation arising from the Chesapeake Bay who are not necessarily strangers, but who will end the Powhatan empire. The second prophecy speaks of three attempts by foreigners (strangers) who will invade the Powhatan territory and conquer the Powhatans on the third try. In most writings on the Jamestown story, these two prophecies are consolidated into one single prophecy that contain the selected details from either or both that the author finds most compelling.

So, were the Powhatans a culture that used omens to retroactively explain a recent tragedy? Perhaps, but I have to say right away that I have no evidence for that either way, and I have to leave the question open in case evidence for or against it turns up. On the other hand, we do know (or more precisely, we are told by historians) that the Powhatans were frequent makers of prophesies, so prophecies like those mentioned by Strachey seem reasonable enough. James Horn says this about the role of priests in Powhatan society:

From James Horn, A Land as God Made It (2005).
If the prophecies were made up after the fact, who would have done so, and why? It seems unlikely to me that the Powhatans, after wiping out the Chesapeaks, would have felt the need to explain or justify themselves to the English by making up a retroactive prophecy. On the other hand, perhaps they would have done so to justify their actions to neighboring tribes. On the possibility that Strachey made the prophecies up on his own, I don't see it as likely. Townsend says the "self-satisfied English" placed themselves in the prophecy, but this is an imprecise statement. It was an individual, Strachey, who said it, and what would have been his motivation for aggrandizing the English in 1609, when the colonists had such a weak hold on only a small piece of Powhatan territory? I think it's more likely that he reported the information as accurately as he could. Helen Rountree has this to say about Strachey's overall credibility: (1989), "he had a wider and more detailed curiosity about Indian life than any other writer of his time." (The Powhatan Indians of Virginia, p. 4).

Strachey wrote about prophecies fairly early in the Jamestown story, and before it was clear that the colony would succeed. It seems unlikely to me that he viewed the colonists as destroyers of the Powhatan confederation--at the time, the Powhatans still held the upper hand. (And if the English originated the prophecies, then it was they who were the prescient ones.) But I'm more inclined to think that Strachey did not invent the prophecies and spoke of what he'd heard from the natives to explain the fearful and suspicious attitudes he observed among them, which is exactly how he explained it.

Assessing Prophecy #1
The first prophecy was of a nation arising from the Chesapeake Bay that would end Powhatan's rule. Strachey wrote, "...his priests told him how that from the Chesapeack Bay a nation should arise which should dissolve and give end to his empire ..."

1) Was prophecy #1 made prior to English arrival?
Probably, as Powhatan eliminated the Chesapeaks before the English arrival. However, we have to leave room for a tiny bit of doubt about a retroactive prophecy made by the Powhatans after the arrival of the English that told of them defeating the Chesapeaks. The prophecy was certainly made prior to English success in dominating the Powhatans.

3) Did the English (or Strachey) make it up?
Probably not, as it's difficult to see a motive for doing so. However, we don't really know.

4) Did the prophecy hit?
Yes. We can say the English colonists 'arose from the Chesapeak Bay', making this an accurate prediction after the Powhatans had misidentified an earlier rival as the object of the prophecy..

Assessing Prophecy #2
The second prophecy was of a series of invasions by strangers that the Powhatans would defeat twice, but fail to defeat on the third attempt. Strachey wrote, "... they have a second prophesie likewise amongst them, that twice they should give overthrow and dishearten the attempters, and such straungers as should invade their territories or labour to settle a plantation among them, but the thyrd time they themselves should fall into their subjection, and under their conquest ...."

1) Was prophecy #2 made prior to English arrival?
We don't know exactly when it was made, but it was definitely reported before the outcome was known. So basically, yes, it was made prior to the event it describes.

2) Did the Powhatans make this prophecy retroactively to explain a prior event?
No, because the Powhatans hadn't yet been defeated at the time Strachey reported this.

3) Did the English (or Strachey) make it up?
Again, it's difficult to see a motive for doing so. However, we don't really know. A red flag is Strachey saying "to settle a plantation among them." It's hard to imagine the Indians prophesying a "plantation," as they wouldn't have known what that was. But this is likely a problem of Strachey's translation of what the Indians meant. For example, if the Indians told of the prophesied invaders planting corn on tribal lands, then Strachey may have described that as a "plantation," reflecting what he knew rather than what the Indians would have imagined.

4) Did the prophecy hit?
The prophecy was mostly accurate, but we don't clearly understand the meaning of "attempters" here. We may assume the Chesapeaks fit the profile well enough to be considered rivals worthy of being destroyed, but who were the second "attempters"? The colonists at Roanoke might be a candidate, but since we don't know for a fact that the Powhatans destroyed them, we can't say for sure. Anyway, the prophecy hits in the sense that the Powhatans were defeated in the end, but the identity of one of the three "attempters" is a little vague.

To conclude, while allowing some doubt about Strachey's account, I think it's very possible there were prophecies that originated with the Powhatans prior to or at the same time as the arrival of the English that predicted the demise of the Powhatan confederation, and which, by coincidence, turned out to be accurate. The Powhatans had been seeing mysterious arrivals from across the ocean for decades, and it does not seem unlikely that Powhatan priests would have sought to explain and prognosticate as required by their positions as holy men and advisors.
I am not often one to quote Paula Gunn Allen (2004), Pocahontas-Medicine Woman-Spy-Entrepreneur-Diplomat, but this case appears to be right up her spiritual alley:
My comment:
Gunn Allen misses the opportunity to take a victory lap over the Powhatans' fairly accurate prophecies and instead regales us with her shower thoughts on numerology. Why the significant number of the English is relevant here is unclear, as it was the Powhatans who made the prophecies, not the English. And did the English really have a "profound belief in the magical properties of the number three," or just a casual superstition to that effect? No matter; Gunn Allen sees spirituality at work in the numbers here, and she's going to run with it.
"The Chesapeake Indians and the Powhatan Prophecy" article by Bernice Latou; Owlcation, updated February 20, 2018
​(C) Kevin Miller 2018
​
Updated April 8, 2018