How was Pocahontas captured? 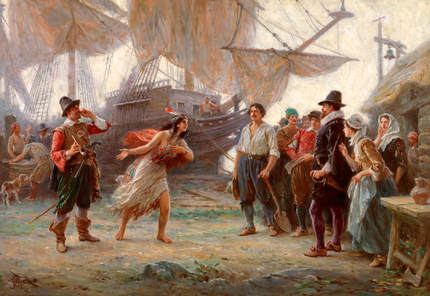 The Abduction of Pocahontas - Virginia Historical Society
The controversy in the Pocahontas abduction story rests mainly in that it happened at all. Pocahontas had been an early visitor to Jamestown in the days when Chief Wahunsenaca and his people were providing food to the desperate settlers. Her abduction several years later was obviously cruel payment for her and her father's kind diplomacy. But by 1613, the settlers no longer viewed the Powhatans as friendly (indeed they were at intermittent war with them), and Pocahontas:s value as a bargaining chip outweighed any feelings of gratitude the settlers may have had for her. (Plus, most of the settlers who knew her personally were either dead or had gone back to England.)

Whether the incident happened as Captain Samuel Argall described it has not been terribly controversial among historians, as most of the recent biographies and histories tell the story in pretty much the same way, although we've probably all become a bit more sophisticated about our understanding of the Patawomeck point of view. I don't know that I can add anything of historical record to cast doubt on the widely-held view of the story, but I think it's worth noting that we are relying on Samuel Argall's account via Ralph Hamor, John Smith and Samuel Purchas, and none* of the three reporters were actual witnesses of the events that Argall described. Smith and Purchas weren't even in Virginia at the time. [* I'm still trying to verify if Ralph Hamor was present in Passapatanzy or not; but it seems that he wasn't.]

The basic story is as follows:
In March 1613, Captain Samuel Argall sailed to the Potomac River to trade with the friendly Patawomeck tribe. Traveling so far to trade had become necessary due to the ongoing war between the Powhatans and the English. Argall learned that Pocahontas was visiting the Patawomecks, perhaps to trade, and he decided it was an excellent opportunity to capture her and hold her for ransom in order to persuade Wahunsenaca to repatriate a number of white settlers then living with the Powhatans, as well as to get him to return some tools and guns that had been stolen. To get Pocahontas onto the boat, Argall pressured Japazaws (a lesser chief, whose name has different spellings in the various accounts) to make it happen, saying that if he didn't cooperate, they would no longer be friends. Japazaws, understandably, protested, saying that his tribe would be vulnerable to reprisals by Powhatan. Argall assured him that the English would protect his tribe against Powhatan. He also offered a copper kettle as payment. Japazaws and his wife subsequently persuaded Pocahontas to board the ship, on the pretext that Japazaws's wife wanted to see it and needed Pocahontas to accompany her. If Argall is to be believed, the stratagem worked as planned, and the abduction occurred without a hitch. {For a more dramatic and detailed account, see the David Price version below. Original chronicler Ralph Hamor and John Smith's accounts are at the bottom of the page.]

My comment:
In recent years, the portrayal of Japazaws has become a bit controversial. In Argall's telling, it appears Japazaws capitulates rather easily and gives up Pocahontas for payment of a mere copper kettle. This seems much like the story of Judas offering up the whereabouts of Jesus for a few pieces of silver, so one has to wonder if this is historically accurate or a literary embellishment. John Smith must have seen the connection to Judas himself, as he referred to Japazaws as "the old Jew," meaning "betrayer" in his account (see early chronicler accounts below.) The interpretation of "Jew" as betrayer comes from John M. Thompson in The Journals of Captain John Smith (2007) p. 184.
Added 5/27/2019

I wrote "mere copper kettle" in the above paragraph, but actually, it may be worthwhile to quote Ben C. McCary, from Indians in t Seventeenth-Century Virginia, (1957) on the value copper had for the Powhatan Indians.
Camilla Townsend, in Pocahontas and the Powhatan Dilemma (2004) has the following explanation for why the Patawomecks agreed to turn Pocahontas over to the English:
The current iteration of the Patawomeck tribe has this on its history page of the tribe's official website:
(Retrieved from Patawomeck Indian Tribe of Virginia website Feb. 24, 2018)
From Paula Gunn Allen, Pocahontas: Medicine Woman Spy Entrepreneur Diplomat (2003)
My comments:
Paula Gunn Allen states here that Pocahontas was not at all duped into being captured, but with complete understanding of what would happen, purposely boarded the ship to fulfill her dream vision. Gunn Allen's inspiration for this viewpoint presumably comes from her Laguna Pueblo experience and from her academic background in literature. While I'm not terribly persuaded of the likelihood of this version, I do find it intriguing, and I applaud Gunn Allen's 'out of the box' thinking. I can't prove her wrong, as it amounts to speculation about Pocahontas's thoughts and motivations. Authors have been speculating about Pocahontas for centuries. I appreciate that Gunn Allen presents this as her belief about Pocahontas and not 'historic fact' handed down from her great-grandmother by way of oral tradition. And though the spiritual aspect of this telling is in conflict with my own tendency to accept only hard evidence and "facts," I recognize that this version has resonance with some Native American individuals. When I attended the "Pocahontas and After" conference in London in March of 2017, one of the Native American speakers referenced this book as having deeply affected her thoughts on Pocahontas. She said that previously, she had more or less dismissed Pocahontas as being a white man's creation, and someone who did not seem at all like an Indian ancestor. After reading Gunn Allen's book, however, she had a new appreciation for Pocahontas's possible motivations, and she became able to see her as a significant Native American of the past.

Interestingly, Gunn Allen asserts that Wahunsenaca (Powhatan) was not Pocahontas's real father, but rather a powerful chief with the honorific title of "Father." She seems to laugh at all of us (including, presumably the Pamunkey Indians) who can only imagine that Pocahontas was Wahunsenaca's direct progeny, as often stated by the original chroniclers. I'm not sure what motivated Gunn Allen to take this stance, but it may help to explain, from her viewpoint, why Pocahontas was not immediately ransomed after her abduction.
Stephen Carr Hampton, from "America, Meet the Real Pocahontas" at his blog, Memories of the People
My comments:
​Hampton is a Cherokee writer from California. He clearly has a harsher view of the events surrounding Pocahontas's abduction than we typically see in the history books. I can't say I agree with his comparison of Pocahontas's marriage with John Rolfe to one of the forced marriages of the Boko Haram girls--Powhatan girls weren't abducted in great numbers (as far as we know), and I don't think any Boko Haram girls got to meet the queen of England--but I recognize this as a Native American viewpoint that would differ from the standard, English account. I have some gripes with a few of the details though.
​Added May 19, 2019
John Pagano, in his recent book, The English Pocahontas - Ten Essential Questions (2020), wrote something that caught my attention. Commenting on the treatment of Pocahontas by the northern Powhatan tribes and by the English, Pagano wrote:
Pagano is someone who knows his source material, and I'm sure he gave a lot of thought to using the word "betrayed." This word has a range of meanings and can refer to both a willful betrayal or an inadvertent one. Still, there's something about this word that bothers me. In the first case, the Indians who told Argall that Pocahontas was with the Patowomecks, we have no idea how that actually transpired. Did they reveal the information knowing she would be at risk? Or was the information revealed in passing? If Argall was their trading partner, they may not have imagined the scenario that followed. Use of the word "betrayal" in the case of the Patowomecks may be appropriate, but we should remember that it was a coerced "betrayal." Finally, there's the "betrayal" by the English. The English were at war with the Powhatans, and Argall and his crew, who were somewhat recent arrivals to the Chesapeake, had themselves never benefited from Pocahontas's visits as a child to Jamestown. Argall saw a chance to trade a valuable Powhatan hostage during a time of war, and it's obvious from his writings that he didn't give much thought to whether or not he was 'betraying" anyone. I don't actually want to defend Argall's abduction of Pocahontas, but I recognize that taking a hostage during a time of war, and which could have resulted in her quick release under certain circumstances must have seemed like a prudent course of action to Argall at the time. (Sorry Pocahontas. I can see my tendency to look at all sides of an issue is getting me in trouble here.)

Added 7/25/2020
David Price, in Love & Hate in Jamestown (2003), gives a dramatic, if slightly over the top account of the Pocahontas abduction.
My comment;
As strange and TV drama-like as this version of the abductions story is, the details included here were actually recorded by Ralph Hamor back in 1613 (see below) However,, when I read this account, I can't help feeling that it couldn't have quite happened this way (though obviously, I don't know for sure). Beyond the basic acts of Argall threatening Japazaws to produce Pocahontas, and him complying to protect his tribe, the rest seems like writer embellishment. I find the idea of Japazaws and his wife both quickly falling into the roles of starry-eyed sightseers for the purpose of deceiving their formerly honored guest, Pocahontas, and then kicking Argall under the table to remind him of their copper kettle, to be farcical. The story likely entertained readers back in the day, though, as it does even now. I also feel that it is this portrayal of Japazaws and his wife as eager accomplices in Pocahontas's abduction that motivated folks like Paula Gunn Allen and Linwood Custalow to create their equally imaginative but opposite versions.
James Horn tells the same story, but without the comedic elements. Compare this version with the one above and think about how differently Native Americans are portrayed in the two accounts. In Price's defense, we should note that the comedic details were present in the source material. However, Horn has evidently determined that those details were either embellishments or too unfair to the Indians, or a combination of both. From A Land as God Made It (2005) by James Horn.
A minor question that comes to my mind is whether or not Pocahontas's capture was premeditated or merely an opportunistic act. Grace Steele Woodward seemed to think it was planned. She wrote in Pocahontas (1969), "For several years the English had contemplated capturing certain key Powhatans and using them as hostages to force Chief Powhatan to negotiate." p. 151. "The plot may have originated with Sir Thomas Gates and Sir Thomas Dale, both of whom were now living in Virginia, or perhaps even with London Company officials. At any rate, Argall was enthusiastic about the idea. He was resolved 'to possess myself of her by any strategem that I could use.' p. 153

Woodward was a little vague on details of the "plot" to capture Pocahontas. She made it sound like Argall went to the Patawomecks with the express purpose of capturing Pocahontas. In fact, it's unlikely that Argall knew Pocahontas was there, but rather took the opportunity to capture her when he learned of her presence on the way to Passapatanzy..
Early chronicler accounts
Relevant Documents
Return to Controversies page
​(C) Kevin Miller 2018