Did Pocahontas willingly convert to Christianity?

As the Woolley quote above suggests, there was a lot riding on the conversion of Pocahontas to Christianity from the English point of view, and in the 400 years since the event, her conversion has been mostly accepted by historians and Pocahontas story writers. The circumstantial evidence does seem to support the notion that she converted, though we’ll never know what she truly believed in her heart. Pocahontas left no words on the subject, and none of the original chroniclers quoted her. Some contemporaries, of course, claimed that she willingly converted, which is probably better than no evidence at all. But we must also consider the possibility of a gap between what the English wanted to believe and what the actual truth was for a captive doing her best to survive. Anthropological studies of other Indians in similar circumstances provide some insight on the question. What we can reasonably do today is view the opinions of experts combined with the few references of the original chroniclers and use our common sense to arrive at our own tentative conclusions. These conclusions, however, will always be conjecture, and should never be confused with historical fact. We will never have a definitive answer to the question of whether she willingly and sincerely converted to Christianity. 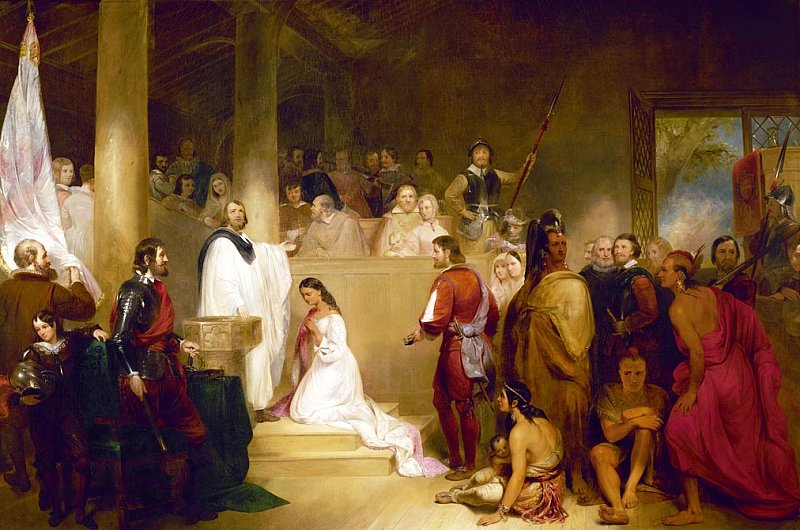 The Baptism of Pocahontas (1840) - John Gadsby Chapman painting in the capitol rotunda
What we know ....

John Rolfe stated as one of his reasons for wanting to marry Pocahontas that he hoped to convert her to Christianity. ("Letter of John Rolfe" (1614) to Sir Thomas Dale):
My comments:
John Rolfe wanted to marry Pocahontas, and  being on shaky ground in addressing Sir Thomas Dale on the matter (because consorting with the "pagan" Indians was frowned upon), he chose to frame his motivation in terms of a marriage for the good of the colony and to save an Indian soul from godlessness. Author David Price appears skeptical of Rolfe's sincerity here. "Dale must have smirked at Rolfe's claim that he wanted to marry Pocahontas for the sake of her religious conversion." (Love & Hate, p. 156). We'll never know Rolfe's level of sincerity, but in any case, his letter to Thomas Dale tells us nothing about whether or not his subsequent efforts to convert Pocahontas were successful, though it has been suggested they were.

Despite Price's suggestion that Sir Thomas Dale may have been skeptical of Rolfe's motivations, we know that Dale himself stated (in "A True Relation of the state of Virginia Lefte by Sir Thomas Dale Knight in May Last 1616" that it was his goal to bring the Indians to knowledge of God.
My comment:
If Dale did indeed doubt Rolfe's motivations (as Price suggested; see above), then what can we say of his own? Either we give them both the benefit of the doubt or we take both declarations with a grain of salt.

We know that because the Virginia Company needed to raise funds for the colony, they stated as one of their purposes to convert the Indians to Protestant Christianity.

Alexander Whitaker, as recorded by Ralph Hamor, in A true discourse of the present estate of Virginia, June 18, 1614
My comment:
This letter by Alexander Whitaker, recorded by Ralph Hamor, is the main evidence we have of Pocahontas's conversion. It shows that through her actions and recitations, she satisfied her religious instructor and captor of her conversion. We cannot, of course, know what she believed in her heart of hearts.
John Smith, in his letter to Queen Anne, described Pocahontas as the first Christian to come from the native population. The letter to Queen Anne has some issues, which will be discussed elsewhere,, but Smith's words likely reflect the general thinking at the time that Pocahontas had successfully been won as a convert to Christianity.
My comment:
We should note that Smith's belief in Pocahontas's conversion to Christianity necessarily had to come from the reports of others (namely Hamor), as at the time of this letter (1616), he had not seen or spoken with Pocahontas since before he left Jamestown in 1609, some 5 years or so before her capture and religious education. And while it's likely that Smith believed she had converted, we should also note that the purpose of the letter to Queen Anne - to persuade her to give a warm welcome to Pocahontas - suggests that Smith wrote details he thought the queen might want to hear.

Also after reading letters (in Hamor) by Dale, Whitaker and Rolfe, Smith concluded as follows (in The General Historie):
After meeting Pocahontas in England, Smith wrote in The General Historie:
Samuel Purchas, an English cleric, was a contemporary of Pocahontas and is said to have mingled in her presence in London. Purchas viewed Pocahontas as a successful convert to Christianity:
My comment:
Purchas speaks of the Virginia Company's desire that Pocahontas become Christian. He also says she demonstrated "Christian sincerity" at the time of her death. Purchas was not present at her death, so his thoughts on this are either from second hand information or based on his own assumptions. Purchas's comments in no way prove the sincerity of her conversion, but they hint at the possibility of her sincere conversion.
As usual, Paula Gunn Allen, in Pocahontas: Medicine Woman Spy Entrepreneur Diplomat (2003), has a surprising take on the topic of Pocahontas's conversion. In the chapter 'Manito Aki,' she imagines that Pocahontas would have accepted Christianity wholeheartedly::
In the same way that Paula Gunn Allen has taken the available information on Pocahontas and brought her own sensibility to the party, others have done the same with varying results. I include them here not because they add to our factual knowledge of Pocahontas, but to illustrate some of the directions our supposition can go. Historians and anthropologists are doing this too, of course, but hopefully with the most solid background information available to them. Anyway, here is what Howard A. Snyder (a pastor) and Dr. Linwood Custalow (a Mattaponi 'historian') have to say on this topic.

From Jesus and Pocahontas: Gospel, Mission, and National Myth (2015) by Howard A. Snyder
My comments on Snyder:
I like that Snyder brings these issues up and tries to examine all sides of them, pointing out worrisome areas. The problem is that he leaps to conclusions that cannot be supported by evidence. With the language and cultural gap, how much of the fine points of Christianity could Pocahontas really have understood, even with the daily (some might say relentless) "catechetical instruction"? And on what historical grounds can her Christian "sincerity" be judged, or her love for John Rolfe? And how can we be assured that her faith "deepened"? Snyder may be right about Pocahontas's "real encounter with Jesus," but we'll never know for sure.

Similarly speculative, but reaching different conclusions, are the thoughts of Dr. Linwood Custalow. In The True Story of Pocahontas; the Other Side of History (2007), Custalow and co-author, Angela Daniel, wrote:
My comments on Custalow:
Although I cannot promote Custalow's book as anything close to actual "sacred Mattaponi oral history", I do find some reasonable speculation in these paragraphs. As a captive kept isolated from her people, and with continual forced instruction in Christianity, how can we consider Pocahontas's conversion sincere and voluntary? The comparison of Powhatan behavior to real Christian principles is also interesting. I don't, however, believe the English had a "plan" to marry her off to John Rolfe, and while it's certainly possible that Pocahontas was depressed during her captivity, I reject the idea that Mattaponi oral history provides any evidence to that effect. For more about Custalow and this book, check my "Meeting in the Middle" page.
The most likely explanation ...

While it is frequently said that Pocahontas converted to Christianity, the thinking among many anthropologists and ethnologists today is that she, like other Indians that came after her, likely incorporated elements of Christian teaching into her already existing Powhatan religious beliefs. In other words, calling it a 'conversion' would be a kind of marketing spin for what could more truthfully be called a 'synthesis and accommodation' to the beliefs of the people that now controlled her fate.

Camilla Townsend, In Pocahontas and the Powhatan Dilemma (2004), wrote:
My comment:
This idea that Pocahontas probably combined elements of Christianity with the religion she grew up with seems the most reasonable explanation to me. I also surmise (with no evidence whatsoever) that the Jamestown colonists probably didn't inquire too strongly about the depth of her conversion. If she performed the rites satisfactorily and recited her lines with minimal error, they were probably satisfied that she had accepted Christianity.
Added July 30, 2020

It may not be obvious to some readers of the Pocahontas story (as it wasn't to me without Camilla Townsend's help), but there is more than one version of the John Rolfe letter to Sir Thomas Dale. There's the version that appeared in Ralph Hamor's publication, which he appears to have edited, and there's the presumed original letter of John Rolfe, with his signature, that is housed in the Bodleian Library and made available online here. The two versions are mostly the same, with many changes in spelling and some minor (?) differences in word choice, but there is one section in the original which is completely omitted from the Ralph Hamor version. Remember, Hamor's version was the one seen by the English public back in the day, so we must assume he had significant reason to delete the section, which amounted to about 127 words. The "real" John Rolfe unredacted version reads (with omitted section in blue):
The Ralph Hamor version of the John Rolfe letter, read by most people, reads thus: What John Rolfe appears to be saying in the omitted section is that even if he marries a heathen, at least his children will be believers, so perhaps God will forgive him for marrying Pocahontas. This shows that at the time Rolfe asked to marry Pocahontas, her Christian beliefs were not yet 100% solidified, if they ever became so. Camilla Townsend speculates that Hamor felt this line of thinking was best kept under wraps, lest people find Rolfe over eager to accept an unbeliever as his bride. (Notes, Townsend, p. 199 of Pocahontas and the Powhatan Dilemma.)

Those who would like to compare the two versions for themselves can find them on this page of my website. Also:
Thanks to Camilla Townsend for pointing all of this out to me.
Relevant Documents
Return to Controversies page
​(C) Kevin Miller 2018
​
Updated April 22, 2021