Is it possible that John Smith never actually met Pocahontas?

This is not really a controversy, and I don't hope to turn it into one. The question arises because of a short passage in The Inconvenient Indian, by Thomas King, a Canadian writer who self-identifies as part Cherokee and who often writes about First Nations issues. The passage is as follows:
My reaction to King:
When I first read this passage, I was a little surprised at the notion that John Smith could have fabricated all of his meetings with Pocahontas, and I had to go back and review the historical record to see if there was even a possibility of truth to this. It turns out that King simply had his facts wrong.

King says "I don't believe that Smith knew Pocahontas." He further states "There's nothing to indicate he did." I guess we could quibble about the meaning of "knew," but John Smith is the first person in recorded history to mention Pocahontas. In his 1608 publication, A True Relation., Smith states, A few lines later, he revealed her name to be "Pocahuntas." One might argue whether or not this passage is definitive proof that Smith "knew" Pocahontas, as in 'talked to her and knew her as a person,' but it's pretty clear that John Smith "knew of" Pocahontas before any other European could claim the honor.

Smith also mentioned Pocahontas in 1612 in A Map of Virginia. This is still several years before she had gained any "fame and notoriety." The text suggests (but does not prove) a friendly relationship between Smith and Pocahontas. In a section of the document where Smith lists some of the Powhatan words and phrases he knows, he includes this sentence:
King is happy to point out how popular culture gets the Pocahontas story wrong, but he wasn't very careful about unearthing the actual facts himself.

King also implies in the above that Smith had told stories prior to 1607 of being rescued by "comely" women. One might think, for example, that Smith told this story once in 1603, then again in 1605, and again in 1607, each time substituting a new and more beautiful heroine. That's not quite how it worked. Smith first told the story of being rescued by a woman (Pocahontas) in 1622. He later (in 1624) wrote of being helped by other women, all of these incidents having occurred earlier in his life. One might argue that there's no essential difference, but it's clear that King is imprecise in his account. As for the women all being "comely" (i.e., beautiful), Smith only indicated that the Lady Tragabigzanda was "beauteous," while Lady Callamata was described as "charitable" and Madame Chanoyes was merely "good."

I'm also slightly irritated at King's easy potshot at Disney. The folks at Disney by no means created the legend of Pocahontas and John Smith; they only repeated it, and they never claimed to be making a historical documentary. I view this as King pushing some easy buttons to tap into already existing Native American dissatisfaction with the Disney portrayal of Pocahontas.

Finally, King states that stories about heroes being saved by beautiful maidens are a "classic," implying that Smith was just repeating a common trope that we would all recognize. So, Dear Reader, in 30 seconds, how many of those "classic" stories can you recall? Tick, tick, tick. Yeah, I couldn't think of any either. {I admit, this is a nitpick, as the charge is plausible and has been pointed out by historians. I guess my nitpick is King's use of "of course," which implies that even non-historians should obviously know and agree on this.]

My comments above notwithstanding, The Inconvenient Indian is an interesting book, and it introduced me to the story (actually myth) of the Almo Massacre, which I hope to write about in this site someday. Thank you, Mr. King, for that.
Camilla Townsend, in her book Pocahontas and the Powhatan Dilemma (2004) had something to say about John Smith's familiarity with Pocahontas.
My comment (Edit: Oct. 14, 2019):
I am not actually as certain as Camilla Townsend seems to be that Smith interacted with Pocahontas during his captivity. It's possible, of course, but we'll never know. I include Townsend's paragraph here as interesting speculation on how well Smith may have known Pocahontas.
Those curious about King's statement in The Inconvenient Indian (above) that "the story of heroes being saved by beautiful maidens is a classic and had been around for centuries" need not wonder about it, as I'm providing a possible source here (Tilton's 1994 book, Pocahontas: The Evolution of an American Narrative). The Philip Young cited by Tilton in footnote 12 refers to the author of "The Mother of Us All: Pocahontas Reconsidered" from Kenyon Review, 24, 3 (Summer 1962) p. 391-415.

From Pocahontas: The Evolution of an American Narrative  (1994), by Robert S. Tilton
Another writer casts doubt on John Smith meeting Pocahontas!

I just stumbled on this article from The Atlantic (March 21, 2017) by Associate History Professor Gregory D. Smithers, of Virginia Commonwealth University where he says "it’s not clear that Pocahontas ever met Smith" and "Smith himself didn’t mention Pocahontas in his initial accounts of the Powhatan Indians." I am fairly stunned by these assertions, particularly the second, which is demonstrably false. I will attempt to contact him and see if I get a reply. {Sept. 10, 2018)

The Enduring Legacy of the Pocahontas Myth, by Gregory D. Smithers, The Atlantic, March 21, 2017

[Update: Nov. 7, 2018.
It's been almost two months since I tried to contact Prof. Smithers from my university email address to his, and he hasn't replied. I suppose I should leave room for the possibility that I wasn't polite enough in pointing out his error, so he felt no inclination to reply. I just hope he doesn't write any more articles about Pocahontas, or that he at least checks his own assertions against the historical record. Also, The Atlantic, which says it ."wants to know what [I] think" had no comment on this either. Oh, well.] 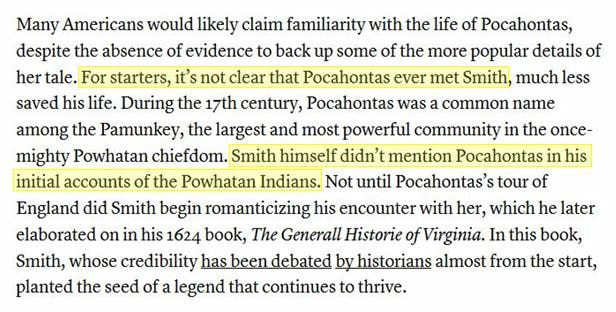