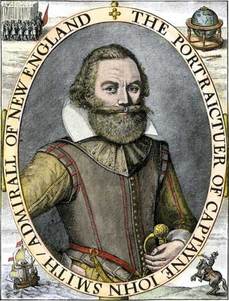 In 1609, Smith suffered from a horrific gunpowder accident that ended his career in Jamestown and sent him, apparently with little hope of survival, back to England. But Smith did survive, and the brief story he told of what happened was just vague enough to ensure that people in the centuries that followed would turn it into an Agatha Christie-style murder mystery that offered no tidy solution.

Smith's account was that while he was asleep on a small boat while returning from an expedition upriver,, a spark of unspecified origin caught his gunpowder bag on fire. The resulting burst of flame burned his body in an area 9 or 10 inches square where his torso meets his thigh (i.e., the groin area), causing him to jump into the river to put the fire out. His companions pulled him out of the river, nearly drowned, and in excruciating pain. He made the long trip back to Jamestown and was relieved of his duties. He was then put on a boat for England, a boat whose departure was purposely delayed for weeks, with Smith receiving inadequate treatment for his wound. He was not expected to live, and the Powhatan Indians were told that he had perished.

The murder plot, in its most speculative version, revolves around the source of the errant spark that caused the fire. Smith, though he accused several settlers of purposely wanting to kill him during his convalescence, made no such accusations about the source of the spark. As far as he was concerned, the fire was accidental. One might speculate the spark came from a pipe, or from the burning fuse that soldiers kept to fire their own guns. It may have come from Smith's own fuse, or from one of the crew. And if you're conspiracy minded, the powder bag may have been set alight intentionally by one of Smith's enemies.

The list of suspects might start with the three men Smith named as wanting to kill him while he waited for the boat to depart for England (see original text below): John Martin, John Ratcliffe and Gabriel Archer. Smith says these three "plotted to have murdered him in his bed." Another possible suspect is George Percy, who took over as president of the colony when Smith became indisposed. None of these people were in the boat with Smith when the gunpowder incident occurred, so one would have to assume the perpetrator had been put up to the task by one or more of the men named.

Historian Mark Summers*, who offers educational tours at the Jamestown Archaearium in Virginia, likes George Percy as a suspect in the planning of Smith's death (since Percy wasn't with Smith at the time of the explosion). Summers points out that Percy had a brother in prison in England for being involved in the notorious 'Gunpowder Plot' (of Guy Fawkes fame) to kill King James.I of England. Summers says that Thomas Percy, who was involved in the gunpowder plot, was a Catholic, so brother George Percy was likely Catholic as well. As such, Percy may have been a natural enemy of Smith, not only because of their difference in social class (Percy was the son of an earl, while Smith was a commoner), but also due to religious differences.  John Smith's famous declaration "he who works not, eats not" may, according to Summers, indicate Smith's Puritan leanings, a stance which would naturally put him in the cross hairs of a disgruntled Catholic nobleman.

* I was at the Archaearium in Jamestown in the summer of 2016 and heard Mark Summers discuss his theory.

HIstorian James Horn (A Land as God Made It, 2005) wrote, "The terrible injury was no accident but a deliberate attempt to kill him, this time by the English." p. 169. Horn cited no one in particular for this statement, so we can assume it's Horn's opinion based mainly on Smith:s vague writings. Josepth Kelly, in Marooned (2018) agrees with Horn and provides a fairly compelling argument for the incident being a deliberate assassination attempt.

John Smith biographer, Peter Firstbrook, (A Man Most Driven, 2014) on the other hand, thinks an assassination attempt by gunpowder was unlikely. He writes:
My comments:
For the most part, the historians and writers I've read (Horn and Kelly being the exceptions) do not put much stock in the "gunpowder accident as assassination attempt" theory, or they are not interested enough to re-examine it. However, the possibility is often mentioned on websites and elsewhere, so we may consider this a low-level "controversy." I don't personally have a strong opinion, and without any evidence, and without even Smith's own suspicions or accusations, I don't think the murder attempt theory should be considered 'fact.' Nevertheless, it is an interesting topic gaining traction, and I do have some questions.

Question 1:
If the gunpowder explosion happened as John Smith described, wouldn't that imply that such accidents were an occupational hazard? How often did other soldiers get wounded or die in similar incidents? If it happened fairly regularly, then we should not look at this incident as being highly unusual. If, on the other hand, this is rare, then we may be allowed some reasonable suspicions.

Question 2:
Peter Firstbrook (p. 296) wrote that gunpowder is only explosive when compressed, but not when loose in a powder bag. If so, then why should a potential assassin fear being blown up in the boat? If the presumed assassin knew that only Smith would be in danger, then this method in the dark of night might be as good as any.

Question 3:
When discussing the relative merits of ways to assassinate Smith (Firstbrook quote, above), why should these suspected assassins be presumed to be any smarter than the would-be assassins in the Guy Fawkes gunpowder plot to kill King James I?

Question 4:
Does the delay in allowing Smith to leave for London not indicate a desire to see Smith dispatched once and for all, as Smith himself suspected? 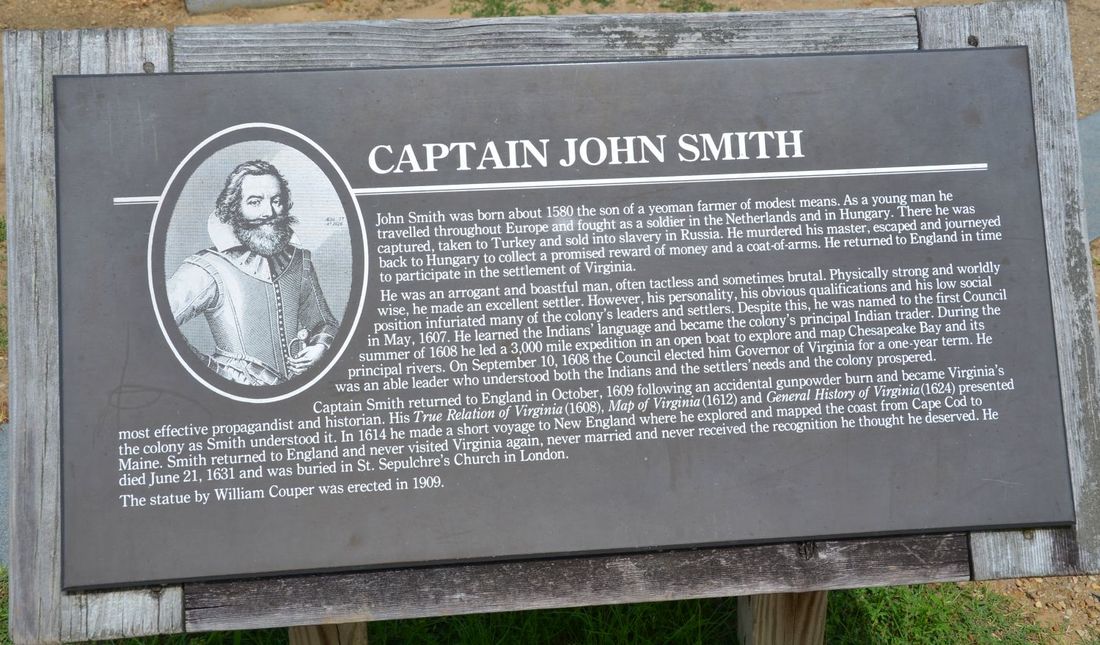 Smith bio at Historic Jamestowne, Aug. 2016. "Smith returned to England ... following an accidental gunpowder burn"
Dennis Montgomery, on Colonial Williamsburg's "Captain John Smith" page, writes: "In those days a match was a pyrotechnic cord used to discharge a firelock musket or pistol. The practice was to light it and keep it burning when there was prospect of the need of force. Smith offered no explanation of why anyone attending him would be on the point of firing a weapon."

My comment:
It seems likely to me that someone would have been standing guard while others slept, possibly having a lit fuse. I'm not sure if Montgomery is suspicious of the 'no explanation' or just pointing out the fact of it.
Charles Mann in 1493: Uncovering the New World Columbus Created (2011) writes:
My comment:
As much as I love this book, I am irritated about how casually writers make these kinds of assumptions. Mann apparently came to the conclusion that Smith was 'clumsy' based on the fact that the presumably rare incident happened to Smith. That someone else may have been the source of the spark or that it may have been ignited on purpose appear to be out of the question for Mann. On the other hand, I can say that when you're writing history, a little imagination can liven up a dull read. Clearly, it's difficult to be both accurate and compelling as a writer. and authors like Mann have to choose between one or the other.
Margaret MacMillan (2020) in her best selling book War - How Conflict Shaped Us writes:
My comment:
This passage seems to answer one of my questions (#1 above) where I wondered if exploding gunpowder supply was a common occurrence. MacMillan says here that it was, though she provides no footnotes or sources for her information. As a result, I can't be 100% sure that John Smith wasn't one of the reasons she believes this to be true. (Ideally, I would want evidence other than Smith's writings.) Smith does not appear in her bibliography, however.

​Added April 17, 2021
Joseph Kelly, in his 2018 book, Marooned, points out that George Percy was also the victim of a gunpowder "accident." The reference Kelly cites from John Smith's Generall Historie is pretty vague, but it's an interesting additional example of this occurring. Kelly implies that this also was an assassination attempt. However, Smith never describes it as such, and since the firing of gunpowder happened twice (i.e., to two different people) one could also read this as a fairly common occurrence among soldiers of the time. This could provide evidence for MacMillan's statement above that carrying gunpowder was inherently dangerous to soldiers. On the other hand, since the reference comes from John Smith, then Smith is the source of both such examples, which is unfortunate. The Kelly passage reads as follows:
The excerpt from Smith's Generall Historie is as follows:
That's it. The he is presumed to refer to Percy, though Smith's writings are haphazard enough to allow for other possibilities. No additional commentary is made on the accident, which may imply a rather common occurrence. So was Percy the victim of an assassination attempt? The likelihood is similar to that of Smith's case. As much as I like the Joseph Kelly book, I don't support his turning this short phrase into yet another conspiracy theory. However, I must admire Kelly's close reading of the John Smith text and commenting on something I hadn't seen before.
Marooned (2018) author Joseph Kelly makes his most definitive statement re. the gunpowder incident here:
My comment:
Ultimately, this is still just speculation. I think it's irresponsible to make a definitive statement on this when there is no additional evidence, only a guess based on personal assessment of likelihood. Where is the data re. how many incidences occurred of gunpowder bags lighting on fire in that era? How many of those were lit by accident and how many were assassination attempts? We obviously have no idea. Like many aspects of the Jamestown story, this is another incident that has no definitive explanation. Kelly deserves credit, though, for citing the counter evidence sources.