The Disney representation of Pocahontas

There is much controversy surrounding the Disney story of Pocahontas, due mostly to its deviation from the historical record, but this page is about the Disney art, or how Disney chose to represent Pocahontas's image visually. The image, too, has generated some controversy, which is interesting, as we don't often see objections to how the starring animated Disney characters look. For example, Moana of the Pacific islands, Tiana, the African-American, from New Orleans (The Princess and the Frog) and Mulan from China, all seem to have escaped significant criticism. Pocahontas, perhaps because she was designed to be less 'cartoonish' and more like a real person, generated the dissatisfaction of those who either expected something different or preferred to have no Disney Pocahontas at all. This page will be about how Disney arrived at the image below and how it was received.

The information provided on the Blu-ray.com webpage, The Making of Walt Disney's Pocahontas, is a very complete account of the art and design of Pocahontas. Nevertheless, I will give this topic a shot with a slightly different angle. 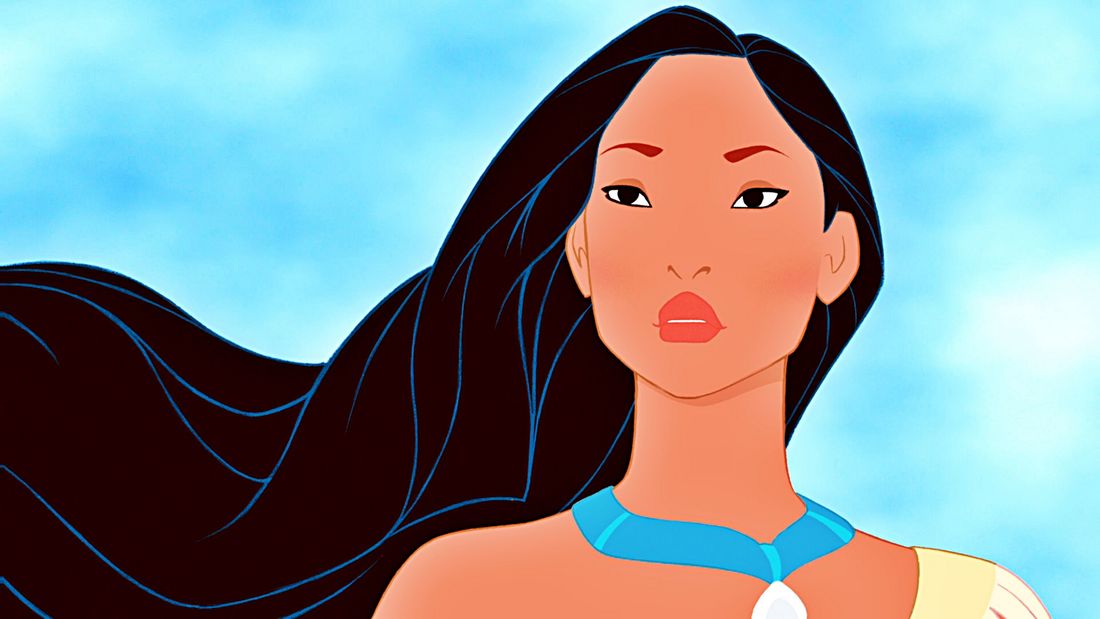 Pocahontas was the 1995 installment of a line of Disney "princess" movies that followed Snow White and the Seven Dwarfs (1937), Cinderella, (1950) Sleeping Beauty (1959), The Little Mermaid (1989), Beauty and the Beast (1991), and Aladdin (1992). After Jasmine in Aladdin, Pocahontas was the second "ethnic" Disney princesses, the first and only Native American one, and the first Disney princess to be based on an actual historical figure. (Mulan (1998) became the second historically based "princess".)

The eight movies listed above were generated over a period of more than 60 years, so it's not surprising that the Disney representation of women evolved in that time.. In particular, the 30-year gap between Sleeping Beauty (1959) and The Little Mermaid (1989), saw the transition from women characters as passive damsels in distress who spent a lot of time doing housework, to more independent, self-actualized women in keeping with the times. (Aurora in Sleeping Beauty (1959), while a quintessential damsel in distress, was exempt from doing housework, as the plot required her to sleep through most of the film.)

The three more modern princesses (Ariel, Belle and Jasmine), while less domestic than their predecessors, also differed from the classic princesses in sporting a wide-eyed, cartoonish look, presumably aimed at appealing to children. With Pocahontas, the animators appeared eager to go in a slightly different direction.

According to one website, Screenrant.com, Disney initially toyed with a youthful version of Pocahontas, which would have been more in line with the historical record. The two images below show two totally different preliminary ideas for the Pocahontas character. (I should note, though, that I have not been able to verify the source of these images, so reader beware.)

Concept art for early imagining of Pocahontas according to Christy Box of Screenrant.com, Nov. 22. 2017
Ultimately, however, the animators elected to abandon that idea and go for a more adult, realistic-looking character in keeping with the serious nature of the story, but one that would allow for a romance, conforming more to legend than to real life. Disney executive Jeffrey Katzenberg is quoted as having called for  "the most idealized and finest woman ever made." He must have known that high hopes would be riding on their concept of a home-grown, American princess.
Glen Keane, the supervising animator of Pocahontas, related in an interview with writer Katie Steed (2014) that he had gone to Jamestown, Virginia to seek inspiration among the trees and streams there to try and imagine what it might be like for John Smith to stumble upon Pocahontas in a canoe for the first time. In Keane's telling, it was while he was standing in the woods when Shirley Little Dove [Custalow] and her sister, Debbie White Dove, emerged from behind some trees and introduced themselves, saying they were descendants of Pocahontas. Keane said in the interview:
Quote by Glen Keane in Animation Magazine:
“Shirley said she had been given a calling by her father to stay and live on the reservation and explain to other people the Indian ways, and also talk about the Great Creator and really share the life of the Indian people with the world. That was her calling in life. Her sister, Debbie Whitedove, who had long black hair and was very beautiful, said, ‘I don’t understand why my sister is into all this Indian stuff. I find it boring. I’m an airline stewardess. I like to fly around the world.’ And I thought, somewhere in between these two is Pocahontas’s personality. So for the whole film I had the picture of those two girls: one a very deeply rooted, spiritually grounded person, who was very traditional and dignified, and the other side of her, someone who’s adventurous, not afraid to break tradition and fall in love with John Smith, and go against her father and save his life.”

Glen Keane, from "Into the Woods with Keane and Pocahontas", Dec. 8, 2011, Animation Magazine link
Irene Bedard is credited as "Voice." on IMDb but she has often said that she was videotaped as reference for speaking scenes. Jamie Pillow was mentioned by Glen Keane in the New York Times Dyna Taylor article as an inspiration and as coming from the Pasadena Art Center. It's not 100% clear, though, if she was used for live action reference, though she is mentioned alongside Belcon and Craig, who were. Pillow is not listed in the credits on IMDb.

I have not found any reference to Judy Kuhn, the singing voice of Pocahontas, as having been used for live action reference. Kuhn says she would have been the speaking voice of Pocahontas, too, but then Disney decided to cast Native American Irene Bedard as the speaking voice. Kuhn's "Colors of the Wind" (written by Alan Menken and Stephen Schwartz) won numerous movie awards for best song.

Live action reference, by the way, is the use of a model, usually of similar proportions to the animated character and often dressed in like-costume, who is filmed performing the actions and gestures that will appear in the animated film. The technique is used to ensure that the animated character's movements are life-like and believable. It is debatable, though, if the physical features of these live action models actually contributed to the features of the Disney Pocahontas. On the other hand, the photo of Charmaine Craig above suggests that she may have had some influence.

Irene Bedard
Irene Bedard, the voice of Disney's Pocahontas, is the person most often identified as the living reference for her image in popular imagination. Actually, Bedard was only used for live action reference, and she is not credited with video reference in the film. However, she said in a 2010 interview:

"During some of the recording sessions they would film me.  ...  I was new to the process and found out that the animators look at that film frame by frame and use it to capture expressions.  One of my habits is pushing my hair behind my ear and I noticed that Pocahontas has the same habit." - Irene Bedard, in 2010 interview with Mike Gencarelli on Media Mikes.

In another interview (Ultimate Disney.com: "An Interview with Pocahontas" by Renata Joy), Bedard said:

"While we were recording, the animators filmed me to use as a reference for expression and body movement. They also captured certain facial expressions and the way my hands moved."

"My 2-year-old already recognizes "Mommy" on the screen. My brother came all the way from Alaska to the Central Park premiere and throughout the screening, he constantly nudged me because he recognized traits of mine."
Concept Art
At some early point in the creative process, and long before the live action reference above, Disney animators would have begun sketching Pocahontas in various poses, and attempting to settle on a concept. Many sketches are available online, but some of them are of uncertain origin. I'm going to post some images here that I think are legitimate, but I will attempt to search their source, and verify that they're the real deal. For now, though, consider these as probably Disney, but not 100% verified:
The image at left ...