Notes in the Margins - Love & Hate in Jamestown

I take notes on the books I read, but these notes are mainly of interest to myself. Rather than include them on the 'Books for Adults' page, I'll put them here. The point is to use my margin notes as jumping off points to do a little further research and make some commentary. This is a low priority page, but over time, I've come to see its value. I've forced myself to dig deeper and look into details and try to discover why the author made certain claims. So far, I've only managed to deal with the first half of the 2003 David Price book, Love & Hate in Jamestown. I had hoped to eventually get to Townsend and others, but that seems increasingly unlikely.. Nevertheless, I hope serious students of the Jamestown story may find some points of interest here. 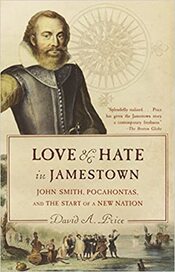 I just reread this book (March 2018). It was one of the first books I read on the subject of Jamestown (after the two Tilton books), and I really enjoyed it on my first reading (and second, too). I had long wondered if the reason I liked it was because it was one of the first, and a second reading would put it in better perspective. While I do have more nitpicks the second time around, I still really like this book. That doesn't mean I give John Smith as much credence as Price does. For him, the Jamestown story is pretty much equal to the John Smith story. Nevertheless, I like how he organized the story and explained all the pertinent parts. The writing style is excellent, and it's so readable. Anyway, below are my margin notes with some commentary.

Only Smith expressed shame at her capture p 152

The Englishmen loved her p 154

Smith went to Plymouth 7 years before the pilgrims p 171

Price accepts letter to Queen Anne and I note it would be hard to falsify the motivations many years later. p 174

Price accepts that Pocahontas preferred to stay in England p 181

Tomocomo didn’t like England, told as much to Opechancanough p 184

Argall thought Opechancanough believed him and Tomo was disgraced, but not so. Supports Custalow? p 184

Reasons for Powhatan not eliminating Jamestown colony when he had the chance p. 185

Sandys and ideas of govt p 189

Not recording blacks by name p 199

Opechancanough’s war had opposite effect p 219

On credibility of General Historie p 227

Pocahontas’s rescue of Smith was not central to his story, more of a footnote p 241

Statement on rescue has ring of truth p 242