What was the meaning of Pocahontas's final talk with John Smith? 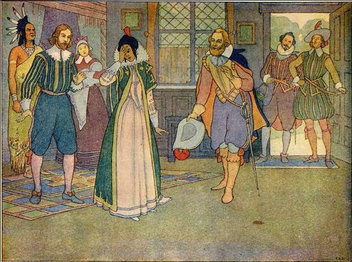 E. Boyd Smith illustration 1906
John Smith has supporters and detractors, but both agree that Smith could stretch the truth at times. Smith is the primary source on so much of the early Jamestown years, but historians find themselves having to take much of what he said with a grain of salt. However, when it comes to Smith's final talk with Pocahontas in Brentford, England, not long before her death, Smith's account of their chat is generally treated with far more respect than anything else he has written. Some writers seem to even forget that Smith is the medium through which Pocahontas speaks, and they attribute Smith's words directly to Pocahontas. We can only hope that Smith was as diligent about reporting her words accurately as people tend to assume. Smith's account of the exchange is as follows (with words attributed to Pocahontas in blue):

From John Smith, The Generall Historie of Virgniia, New England & the Summer Isles (1624)
There are several reasons why this passage seems more credible than others by John Smith. First, it has the 'ring of truth' due to the fact that it shows Smith in a somewhat weak position, forced back on his heels by an irate Pocahontas. Smith is generally portrayed as an 'in charge' kind of guy, so we feel inclined to accept this slightly self-deprecating account. Second, the message of Pocahontas seems to square up with the history as we know it, Third, the words are both surprising and at the same time plausible; we trust them as real. Finally, there are so few words that can be attributed to Pocahontas that give even a hint at how she may have formed her thoughts, that people are especially willing to call these powerful words her own.

However ... please see my questions in the My Comments section further below.
From Camilla Townsend, Pocahontas and the Powhatan Dilemma (2004).
From Cyndi Spindell Berck, Pocahontas and Sacagawea (2015)​
From Frances Mossiker, Pocahontas: The Life and the Legend (1976)
But what did the exchange actually mean?

Peter Firstbrook, in A Man Most Driven (2014)
James Horn, in A Land as God Made It (2005)
Helen C. Rountree, in Pocahontas, Powhatan, Opechancanough: Three Indian Lives Changed by Jamestown (2005)
Paula Gunn Allen in Pocahontas: Medicine Woman - Spy - Entrepeneur - Diplomat (2003)
My comments:
There are two aspects to this John Smith account that must be considered. First, is the account reliable? Second, what was the meaning behind these words? Of course, if it can be determined that the account is not reliable, then the second point hardly matters.

As was said above, many are willing to doubt Smith's accounts of his extraordinary lifetime exploits, which are sometimes described as 'self-serving' Researchers have devoted much effort to sorting out his reliability, and I am trying to do so as well on a page on this website. I try to be open-minded about Smith, and I see why this account of his final encounter with Pocahontas seems more plausible than some of his stories. However, I wonder about some details.
​
First, there were obviously no recording devices in those days, so we are putting a lot of faith in John Smith's recollection of what transpired. Although there were presumably witnesses to the encounter, we know nothing about how he managed to remember the precise details of this conversation. Did he report only the gist of what occurred, relying on his own memory, or did he consult others to produce the most accurate account? Did he even care if the words were accurate as long as it seemed roughly true to him? Did he write down his recollection immediately following the encounter, or did he reproduce it from memory some time later? Is it possible some of the presumed witnesses disagreed with parts of the account but we no longer have access to their objections? Remember too, that Smith may not have considered this encounter with Pocahontas as important as we do 400+ years later, so we can't be sure that Smith was trying to 'tell a good story' or 'tell an accurate story', if indeed those two possibilities don't align perfectly.

Maybe someday we will have more information about the accuracy of this encounter, but for the moment, we can only rely on our intuition and our level of faith in John Smith. For the meaning of the conversation, I defer to the writers above.
Frances Mossiker, in Pocahontas: The Life and the Legend (1976) had an interesting interpretation of the final lines by Pocahontas, repeated here:
Mossiker wrote: "(Reading between the lines of Smith's account, it is not impossible to construe Pocahontas's outcry as a reproach against Rolfe, against Dale, against the Reverend Whitaker for having deceived her in the matter of of Captain Smith's death. These words of hers, as she is quoted by Smith, are open to the interpretation that she would never have married John Rolfe had she known John Smith was still alive.)" p. 274. [The parentheses are part of Mossiker's text.]

My comment:
It's interesting to think that Pocahontas may have been directing her dissatisfaction specifically at the people named. It's also important to emphasize that the lines come from Smith, and in particular, the part where Mossiker suggests the possibility that Pocahontas would not have married Rolfe if she had been better informed, is a stretch. (Note, though, that Mossiker is clear that she is not trying to make a definitive statement, but offering a possible interpretation.}  Even giving this conjecture the benefit of the doubt, you have to wonder if the sentences reflect the thoughts of Pocahontas or what Smith would like to think is percolating in Pocahontas's mind. Ultimately, there's no way to verify the accuracy of this reporting by Smith or what Pocahontas was actually thinking. However, I'm glad I finally managed to read Mossiker's Pocahontas, as the author had many interesting ideas that I haven't seen elsewhere.