The Simon van de Passe engraving
The only image of Pocahontas made in her lifetime (left). This is the  closest we'll ever get to knowing what Pocahontas looked like.* The image on the right is a copy of the engraving made over 150 years later. *And check out the Mary Ellen Howe version!
From Savage Kingdom (2007) by Benjamin Woolley
"... to advertise Pocahontas's presence there [in England], the Virginia Company commissioned a portrait. An obscure and therefore relatively cheap Dutch artist called Simon Van de Passe was hired to perform the task. The result was an awkward, probably rushed affair. It showed her dressed in expensively embroidered English dress, her face framed by a huge starched ruff and feathered high hat. Perhaps the most noticeable feature of an undistinguished work was that she clutched a fan of three white feathers, the insignia of the Prince of Wales, evidently included as a homage to Prince Henry's influence over the venture. The engraving printed up for mass circulation was even less flattering." p. 332.

From A Man Most Driven (2014) by Peter Firstbrook
"During her visit, Pocahontas also had her portrait painted, and then engraved by Simon van de Passe, the same Dutch artisan who caught Smith's likeness for the Map of Virginia. The painting now hangs in the National Portrait Gallery in Washington, DC." p. 334


From Pocahontas, Powhatan and Opechancanough (2005) by Helen Rountree
"One of the things that passed the time [at Brentford] was that Pocahontas had her portrait done. It was not a painting, for that would require too much time (and money). Instead the engraver Simon van de Passe, who would later create a portrait of John Smith, made a sketch of her and then produced engravings from it that were circulated to interested parties. ... That engraving was the only portrait of her done from life, so it is unfortunate that van de Passe was no expert at depicting an Amerind face with epicanthic folds over the eyes. Artists in later centuries largely ignored that picture and painted their own, even paler, more Europeanized 'princess.'" p. 180. 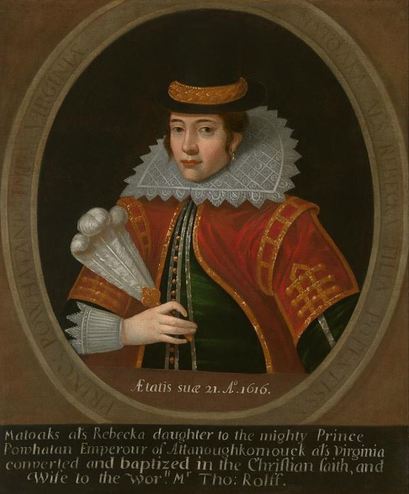 Booton Hall Portrait
The Booton Hall Portrait was painted by an unidentified artist, modeled after the Simon van de Passe engraving and some time after the engraving had been published. The portrait is and has been believed by some to be the original upon which Simon van de Passe based his engraving, but that theory is currently not in favor. The painting can only be traced back to the mid-1700s, so there is no evidence it was painted during Pocahontas's lifetime.

Philip L. Barbour, in Pocahontas and Her World (1971), wrote “A European portrait-painter of 1616-1617 would surely have noticed that Pocahontas was 'brown’ or 'tawny,’ like the rest of her people. But the color of her skin in the portrait is clearly European, and her hair is a European brown, not an Indian black. Relying only on the engraving, a painter-copyist would not have recognized his own error.” (from Wikimedia Commons).

In the same vein, the beaver hat is shown as black, while the engraving appears light in color (white or tan). This is another mistake a painter-copyist could have made, but not the original artist/engraver or a hypothetical copyist/engraver.

John Chamberlain (1553-1628), after seeing  a copy of the engraving that was widely published, wrote in a letter, "Here is a fine picture of no fayre Lady." It is believed Chamberlain was referencing the engraving and not the painting in order to make such a comment.
​In researching the Simon van de Passe engraving and its related painting, the Booton Hall Portrait, I wondered how we actually know which of the two came first. It is generally accepted that the Simon van de Passe engraving is the original, as I've indicated above (via Rountree 2005), but how do we know for sure? Do the historical records of the Virginia Company actually state that Van de Passe was commissioned to make a Pocahontas portrait? As far as I can tell, there is no reference in the Virginia Company documents that mention hiring Van de Passe (but I say that only because no authors in my research have referenced it). Researchers have made some (reasonable) assumptions based on a few facts that strongly suggest the Simon van de Passe engraving is the real original. However, we do not have 100% certainty. I welcome any information from readers that can help settle the matter.

Reasons why we believe the Simon van de Passe engraving is the original:
An interesting (if unconvincing) defense of the Booton Hall Portrait as the original came from a Francis Burton Harrison, who wrote (circa 1926?), "In the end, therefore, the authenticity of the portrait rests largely on the fact, which is a convincing fact, that it is the palpable original from which DePasse engraved the cruel caricature which ever since her death has passed current as the likeness of Pocahontas, a caricature reproduced again and again to illustrate the little maiden's romantic story .. To bring home this identification and criticism, it is only necessary to compare the photographs recently made from the original portrait and from an example of the DePasse print ...." In other words, the painting must be the original because it's more attractive! (from "The Pocahontas Portrait" (1927).
Essay about the Simon Van de Passe engraving and the Booton Hall Portrait at the U.S. Govt. Publishing Office/Catalogue of Fine Art

The following books (among others) all misidentified the woman in the Sedgeford Hall Portrait as Pocahontas. At the time these books were published, there was some doubt* about the age of the portrait by art historians, but generally, people accepted the popular identification, as no alternative information existed. The subjects were finally identified as Pe-o-ka and her son in 2010 by researcher Bill Ryan.  * Woodward's book may have preceded the doubts. Skepticism about the portrait is mentioned in Tilton's Pocahontas: the Evolution of an American Narrative (1994) p. 108.
Additionally, Paula Gunn Allen, in Pocahontas: Medicine Woman, Spy, Entrepreneur, Diplomat (2003), appears to refer to Pocahontas being in the Sedgeford Hall Portrait, though she doesn't identify the portrait by name:  “ … someone seems to have determined that the young couple should visit the ancestral Rolfe estate. … While they were there ... a portrait of Lady Rebecca and her son, Thomas, was made.” p. 294
Historical Sketches by John White circa 1585-1586
Updated March 6, 2018 / Banner photo by Hadley-Ives